by Tran Longmoore
in
Sports

The Saline girls cross country team is in a rebuilding year. So with their one star runner out with an injury, Saturday’s second place finish at the Bret Clements Bath Invitational was a pleasant surprise. 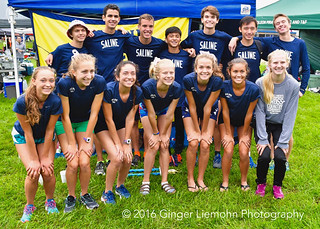 The Hornets were led by senior Regan Barsch, who broke 20 minutes for the first time in her career.  She finished in 19:40.1 and finished 11th. Barsch ran with sophomore Kayla Fortino  (12th, 19:57) for much of the race and then pulled away at the end.

“I think the entire top seven had a pretty good day. I don't see a bad race on the chart. Barsch ran under 20 minutes for the first time and led the team. She was neck and neck with Fortino for most of the race, and that girl is tough in the finish, and Barsch finished 17 seconds ahead of her. That says a lot about Barsch,” Spina said.

“We had two freshmen in the lineup. There were a lot of pre-race nerves for them, but they managed them well. Stepping up and performing is a big deal, so that was important to see,” Spina said.

Despite a solid summer of training the second place finish beat all expectations, Spina said.

“Based on the teams there, I thought we would be fourth or fifth. If we got lucky, I thought we might eke out a 3rd. I don't think anyone expected the girls to be second. That's just far above where we should be at this point based on the talent we brought back from 2015,” Spina said

Tran Longmoore
Tran Longmoore is a veteran community journalist. He is founder and owner of TheSalinePost.com. He is co-publisher of The Saline Post weekly newspaper. Email him at [email protected] or call him at 734-272-6294.

No ad viewed yet.